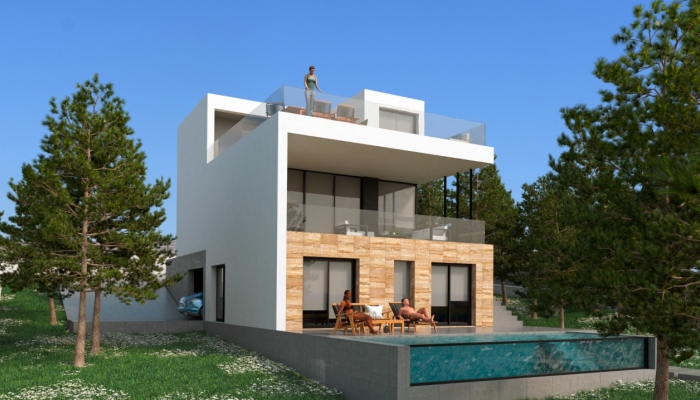 New promotion of independent villas of 3, 4 or 5 bedrooms, just 400 meters from the sea. The houses are distributed on 3 floors and have a modern architecture of straight lines and large windows that bring much light to all the rooms of the house. The villas are built on plots of up to 800 m2 and include a paved parking area and a private swimming pool.

The descriptive name of La Manga (the sleeve) holds an interesting geographical layout which has become one of the symbols that best identifies the coast of Murcia as a tourist resort: a chain that stretches along approximately 24 km from Cabo de Palos to the Punta del Mojón, and is the natural limit of the salt water lake known as the Mar Menor. Originally, what is now known as La Manga del Mar Menor was a bay open to the Mediterranean; at either end, volcanic reefs gradually held back the sand and sediment that was dragged along by the sea currents to form a sandy column of dunes and rock vegetation and long beaches in contact with two seas: the Mediterranean and the Menor. La Manga is a narrow piece of land with a width that varies between 200 m and 1 and a half km. It is cut off by natural channels that keep the two seas in contact with each other; the so-called "golas" allow water from the Mediterranean into the lake.

900.000€
Notify me when prices drop Add to favorites Delete from favorites Send to a friend Print PDF
×
×