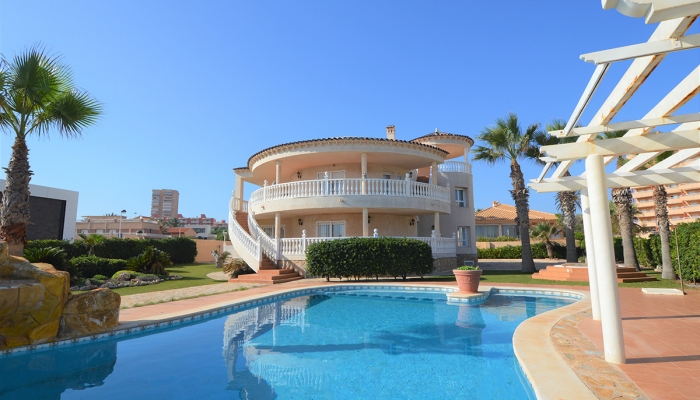 Stunning luxury villa on the very edge of the beach for sale in La Manga, Costa Calida.

Located next to the shore of the beach of Banco de Tabal, on the Mediterranean Sea and with stunning views, it even has its own private access to the beach, within walking distance of stores and facilities, well connected and at the same time in a quiet and peaceful residential area of luxury detached villas and just 10 minutes drive from La Manga Golf Club.

It has a total plot area of 1.478 m2 and a constructed area of more than 600 m2, with a total of 6 bedrooms and 5 bathrooms in the main house and 2 bedrooms and 1 bathroom in the annexed guest apartment. All the rooms, both in the main house and the guest house, are double, many of them with direct sea views. Large living room with access to terrace and fireplace, separate kitchen, large terraces bordering the entire house offering magnificent views and a large solarium. The guest house has its own living-dining room and kitchen.

Special mention deserves the large private pool and beautiful gardens that this property offers, plus a large area for private parking. Also noteworthy is the basement of the house, enabled as a party room, even with its own bar, games area with several rooms or large jacuzzi, Finnish sanua and gym.

It has air conditioning and central heating, is for sale partially furnished and equipped.

The descriptive name of La Manga (the sleeve) holds an interesting geographical layout which has become one of the symbols that best identifies the coast of Murcia as a tourist resort: a chain that stretches along approximately24 km from Cabo de Palos to the Punta del Mojón, and is the natural limit of the salt water lake known as the Mar Menor.

La Manga is a narrow piece of land with a width that varies between 200 m and 1 and a half km. It is cut off by natural channels that keep the two seas in contact with each other; the so-called "golas" allow water from the Mediterranean into the lake. As such, the space was kept virgin until the 60's, when La Manga was "discovered" as a tourist resort and underwent a transformation which included the urbanisation of the area and the construction of tourist infrastructures.

1.380.000€
Notify me when prices drop Add to favorites Delete from favorites Send to a friend Print PDF
×
×